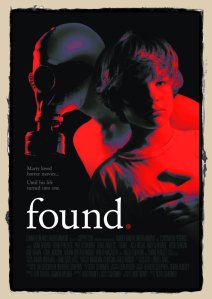 Found is a 2012 horror film directed by Scott Schirmer and co-written by Schirmer and Todd Rigney (based on his novel). I was deeply affected by this film and just may be ruined from ever enjoying another movie.

The plot of the film is deliciously simple: a young boy discovers that his older brother is a serial killer and must then battle his inner demons to determine if he is headed down that same path. It is beautifully shot with vibrant colors and clever camera angles to reflect a twelve-year-old’s imagination.

Found is, first and foremost, a study of our protagonist. Twelve-year-old Marty (delicately, intelligently played by young Gavin Brown) is a sensitive, nearly friendless boy, obsessed with horror movies. Actual time and care is spent developing his character. I usually despise voiceovers, but Marty’s intimate conversations with the audience suck us right into his stream of consciousness. Though I haven’t read it, I suspect the novel is the major influence in these lines. The effect is that the audience becomes Marty’s only true friend. 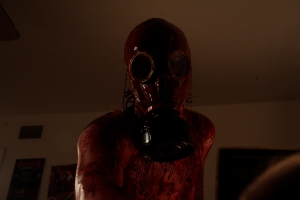 As we are now allied with Marty, the subplot of bullying nails the frustration and cloying loneliness of being the outcast. When Marty’s only on-screen friend forsakes him, we feel the heartbreak. The rationalization of the betrayal is as stark as reality. All the elements click in this scene where Marty takes a slight cue from his brother and dishes out a bit of revenge. And here—just as later when he unleashes on bully Trevor—we rejoice in Marty’s cruelty.

An entire paper could be written on the Headless video Marty finds in brother Steve’s room and watches with his friend. (This movie-within-a-movie was later expanded into its own film by Arthur Cullipher, Todd Rigney, and Shane Beasley, who all worked on Found. https://www.youtube.com/watch?v=ns2U6gXbMFU) This slasher movie is an exercise in envelope-pushing depravity. Not only has it clearly inspired Steve’s murders, but we are strongly led to believe (I think) that it is the video-taped trophy of an actual killer. As sick and twisted as Headless is (and it really is), the genius of it lies in its filming. Scott Schirmer could have called for Gaspar Noé-style ultra realism, but instead went in a direction of slightly more fantastic imagery—which matches the very texture of our movie. Don’t get me wrong, the level of brutality is stunning and doesn’t exactly look fake, but such things as jump cuts and obvious editing clue us into the direction that it is perhaps indie horror gone mad.

The major theme in Found is burgeoning sadism. Marty’s young mind clearly roils in confusion: he’s teased and beat up at school—should he fight back? Is his love of horror movies an early indication that he will end up a killer like his brother? The only thing he never debates is whether to expose his brother. In Marty’s world, that is unthinkable. But is it to protect his idolized sibling, or to disguise his curiosity? And this all begs the question, does “found” refer to Marty finding the heads in the bag, or finding himself?

Found blew me away. This film resonated with me unlike any other I have seen. Perhaps that is because it connected with my personal experiences with surprising precision. In many ways I was Marty. I, too, grew up as the shy, sensitive, picked-on kid, also obsessed with horror movies I was way too young to be watching. And the Indiana landscape of this movie was an easy substitute for my own small-town Wisconsin home. Or perhaps it is because this is a genius film, presenting an unfiltered, unapologetic view of a young boy facing very adult situations. With a button ending that perfectly caps this empathetic thrill ride. I cannot recommend this film enough.

This entry was posted on March 21, 2015 by jasonwhitehorror. It was filed under horror, movies, Review and was tagged with found., horror, Todd Rigney.